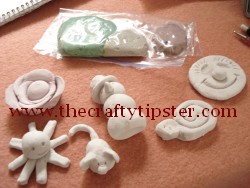 When I started my free craft project website, The Crafty Tipster, I swore that I would not include any project that I either did not make myself or had at least one usable picture of the finished project. While that has kept the site from being yet another gigantic site of semi-useful craft projects, it also means that the site is growing very slowly.

Time is my enemy on the site. Creating, finding or researching a project takes time. Taking pictures and then writing a tutorial that can actually be understood and used simply takes a fair amount of time. I’m not complaining. I just kept putting it off for projects that provided a quicker end product.

I finally added the latest project. Last Christmas we had dinner at noon-time which left a large part of the day activity free. So, I thought why not make something that I could add to The Crafty Tipster? Little did I know it would be over 9 weeks later before I finally posted it.Fun With Clay would be a great way to describe our afternoon at play. We combined flour, salt and water to create a fun clay that can be air-dryed. With no kids in the house, our creativity is certainly limited with age, but we did have fun trying to make something worth keeping once the photos for the tutorial were taken. (Not sure we succeeded and the smallest clay creation has already met with an accident.)

Anyway, if anyone’s interested in checking out a no-bake clay project, there’s one now posted on The Crafty Tipster.

Our creations, such as they are, appear above; minus the poor teeny kitty that was dropped and now is without two of her legs.

Open the conversation by being the first to comment on A new free project – finally!.