There’s often very little news after a major natural disaster that makes you smile but one story amid the ruins of the town of Tempera Italy certainly made me smile. 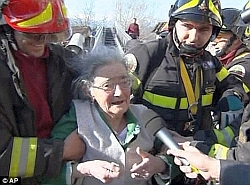 Trapped after her own house collapsed upon her, one 98-year-old woman found herself with nothing but time as she waited to either be rescued or die in her home. Being from that generation that has seen so much, she spent her time with her wool and her hook. Buried alive and she just calmly sat among the debris and crocheted for 30 hours!

Sounding much like my own grandmother, who were she alive would be 101, Maria D’Antuono had a final request from her rescuers before being taken to an area hospital – a comb. She, like so many of her generation could not consider going to the doctor or hospital without first putting herself together.

I always knew crochet was a good way to relax but one plucky lady in Italy has surely proven it to the world.

Too Expensive to Make
When boo-boos turn out cute...
From Shop Chatter to Product Line
WIP Crafting Report January 2012

Open the conversation by being the first to comment on Crochet & Chaos.