Let’s face it, one of the biggest insults to everyone in attendance at a craft fair is the vendor who proclaims that every item in their booth is handmade when much of it was purchased in a completed state from Fire Mountain Gems, Oriental Trading or some other source. In all of our travels, sadly, we’ve only heard of one vendor being removed from a show for this scam. It is a scam and craft show organizers should remove vendors who commit this fraud.

I can’t tell you how many vendors have looked me in the eye and told me that ‘Oh, yes, we certainly did make this.’ Even when I told one vendor that I saw the same exact pieces in the Fire Mountain catalog, he still proclaimed that he made all of his own jewelry.

Unfortunately, these scammers have made it a challenge for any artisan or crafter who creates items with such skill that they appear to be professionally manufactured rather than handcrafted. I thought I would offer crafters some suggestions on how to avoid craft show attendees assuming that their items are not handmade and were purchased for resale.

Overfilling your booth with too many items can do more harm than good. At a recent show we attended, a fellow selling hand-woven rugs may have fallen victim to having far too much on display. I know my first reaction was that he could not have possibly made so many rugs himself.

Let me describe his booth for you. He had a single table with two or three piles of small area rugs. Each stack was about three foot high. His booth looked more like a flea market stall than a craft show booth.

Hardly anyone looked at his rugs while we were there. I may have been the only person who actually touched one of them.

Too Much of the Same Thing

Again, using the rug-maker as an example, all of his rugs were made with the same white-beige materials. A few had some pale, pastel colors running through them but basically his tables were covered with what amounted to a six to nine feet high pile of beige.

Of course, the rug maker is far from the only crafter we’ve seen who made the mistake of displaying too many of the same item in their craft show booth. 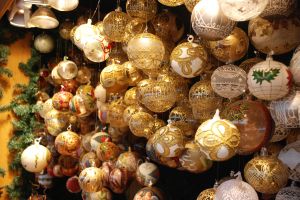 The Christmas decorations shown here are a good visual example of what I’m talking about.

There are almost too many of them to see any one ornament clearly and they look like a big shiny jumble rather than a selection of beautiful, handmade glass ornaments.

It might have taken you a full year to paint all of those notecards, crochet those scarves or sew those purses. It might take you three or four days just to make one of your items. But, if your craft show display includes a virtual mountain of product, people are going to wonder if you really made it yourself. Better to keep some stuff off display and have folks ask if you have a particular item in a different size or color than to overwhelm buyers with too much product and too many choices.

Is your handcrafted item too similar to a commercial product?

Just about every crafter knows, their biggest competitor are cheap imports. We both know that they truly are not your competitors but in an often-price driven marketplace, they can and do sometimes cause people to balk at the prices of truly handmade items.

We were in a booth speaking with the vendor at a show recently and watched as a number of people looked interested in her items until they saw the price. She had told us generally how she made them and what raw products she was using to make her zippered pouches and purses. The pieces were beautiful. But, from a few feet away looked quite similar to imported items we have seen in many tourist gift shops.

While we were in her booth, I think I might have made her a sale simply by telling everyone nearby that her purses were all handmade from the materials she had described to us. For that customer, all doubt was removed that the item was imported and was indeed something truly special.

In a future post, I plan on talking about other ways to sell special items in craft shows through a number of merchandising tricks of the trade.

More and more shows are allowing a certain percentage of a booth to contain table fillers not actually made by the vendor. To me, these have become a double edged sword. Originally, I thought this was a great way to help fill the tables as well as offer an item or two at kid-friendly prices. But, this has led to too many scammers with tables full of things they didn’t make and leaves people questioning honest vendors, “If they didn’t make this, how much else in their booth didn’t they make?”

After over seeing thousands of submissions to Crafty Tips and even more handmade items in person, I’ve come to the conclusion that very few artisans and crafters could not come up with something that they could price under $5 and certainly under $10. Off the top of my head, I can only think of one artisan who would be unable to meet that price point and I doubt you will ever see him at a craft show anyway – his stuff sells for thousands of dollars and would only be shown in an art gallery.

Before you place that order for table fillers, check out your stash of supplies and see if you can come up with some small little what-not that people might like. Perhaps, search the web for inspiration and ideas – no stealing of ideas please unless the designer says you can.

What do you do to ensure people realize that you made all of your items and did not purchase them already made?

One Response to Could People Be Thinking You Really Didn’t Make It?