While doing some research to help find more great sites to share with everyone in the free seed bead patterns section of Crafty Tips, I found a wonderful story about what has become a world record-winning beaded baby belt.

Let’s start with what a baby belt is. A baby belt is a traditional aboriginal garment used by mothers to carry their babies. This baby belt measures about 6.5 meters (that’s a little over 21 feet to us Americans). I couldn’t find what the traditional length of a baby belt is but I suspect it is closer to 6 feet rather than 6 meters. 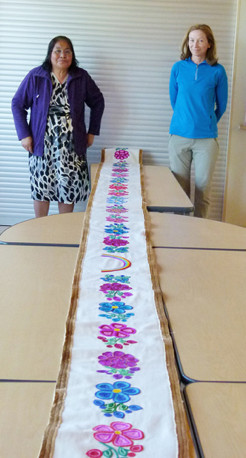 Mary Jane Francois, a 71 year-old Canandian, who is the elder at K’alemi Dene School in Ndilo (pronounced “Dee-low”), has been sewing beads for four hours a day from August 2010 until May 2012. The beads were sewn into white stroud atop moose hide. The flowers were originally drawn by Patricia Baldwin, a teacher at the school. She took the designs from other traditional beadwork pieces that had been made by Francois.

This amazing project is going to be housed at a very special place – the cultural room of the K’alemi Dene School in Ndilo. Each of the 26 flowers is about the size of a person’s hand. The rainbow in the middle is the symbol of the school. Francois enjoys making all kinds of things including beaded moccasins, jackets, mitts and gloves.

The news story had a few quotations and a little bit of other information but it left me wanting to learn more about the story. In about 30 minutes, I learned that this special lady and the entire community are working to keep their traditions and culture alive and share it through the community school they are all so proud of.

You see, this is a special place with a community school that they had fought almost 30 years to establish. The building where the beaded baby belt will reside has only been in existence for 3 years. The school first opened in 1999 and was an 800 square meter building that left teachers storing the laminating machine in the women’s bathroom and gym equipment in the staff bathroom. After years of fundraising, in 2009 the students and faculty moved into a new, permanent building that measures 1,800 square meters.

Speaking of food, the school has one of Canada’s first school food programs. They started a morning snack and lunch program that provides the students with a breakfast/snack of fresh fruit (something many of the families in the area can’t afford), dry caribou meat and bannock. Bannock is an aboriginal bread and a village elder comes to the school each afternoon to make fresh bannock for the next day. The elder also gives the students language lessons.

Ndilo is a community in the Northwest Territories of Canada. This region was settled by the Yellowknives Dene First Nation.The Yellowknives, or T’atsaot’ine are one of the five main groups of the Dene indigenous people that live in the Northwest Territories of Canada. The name, which is also the source for the later City of Yellowknife, derives from the color of the tools made from local copper deposits.

Perhaps it is because the community of Ndilo only has a population of around 200 aboriginal people that they have been able to preserve their culture while giving the students the tools they need to face the world. Perhaps it is because the school, which has become the heart of the community, teaches just over 90 children from kindergarten to 10th Grade that makes this community noteworthy. But, it’s probably people like Mary Jane Francois, Patricia Baldwin and the un-named bannock baking language teacher who have created a place where the community comes together to celebrate their heritage and their kids, that should be the real story here.

It’s such a shame that American schools are no longer the center of a community. Perhaps we could learn a lot from this tiny community and a talented beader who is sharing her native culture with the future generations of Ndilo, one bead at a time.

One Response to Embracing Culture, One Bead at a Time