I remember somewhere in the distant past, when I was still in high school, that kids were making and exchanging friendship bracelets as a colorful and quirky way to express their fondness for each other. 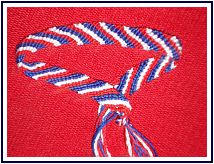 30 months ago, I happened upon a wonderful website and forum dedicated to making friendship bracelets. The creator had patterns like I’ve never seen before and I went ahead and added the site in hopes of listing more like it and perhaps seeing some additional traffic from members of their forum. Despite having sent the site almost 8,000 visitors, the site owner has never shown an interest in participating in Crafty Tips by granting me permission to use a picture from her website. (Heather, if you ever read this…wouldn’t you rather have a picture instead of the ugly placeholder image I use?)

Anyway, I’ve been noticing a curious trend the past 6 months or so. Whereas it was always in the top 20 or so search phrases that were bringing me traffic, free friendship bracelet patterns has vaulted to the number one traffic generating phrase on my site for months. Anywhere from 10-15% of the search engine traffic on Crafty Tips is from people searching for patterns to make their own friendship bracelets.

So, it seemed only natural that if that many searchers are looking for something it must be a very popular craft right now or it is a challenge to find useful websites on the topic. Either way, it seemed easily justifiable to add a top-level category on Crafty Tips for something I had originally listed deep in the Children’s Craft Projects area.

But first, I needed a picture for my new Friendship Bracelets category. The sites I typically use to find free photos did not have any friendship bracelet pictures. OK, so I figured I would just make my own – how hard could it be? After all, I can remember girls sitting in class with strands of embroidery floss tied to their pants leg and knotting away while actively participating in the class.

Armed with an instruction sheet from a different website and some thin yarn that I have way too much of, I figured I could knock out one of these bad boys in an hour or so.

Lesson one learned the hard way…when dealing with cords that are about 72 inches long they have a tendency to tangle the second you cut them.

Lesson two was learned much later…72 inches is way more thread than is needed in most cases.

Lesson three was that no matter how skilled someone is at making something they may not be able to write a decent tutorial. (I’ve known that for years when it comes to computing-related endeavors but I thought the simplicity of the instructions matched the simplicity of the craft in this case.)

If someone asks, I might go ahead and write a full tutorial on making friendship bracelets but for now I’m just going to talk about some of the things the basic bracelet making patterns seem to take for granted.

1. If you have never made a friendship bracelet before, just do the basic stitch pattern and plan on pitching your first one in the trash bin. Mine was uneven with scraggly sides and very childish looking.

2. I think if the instructions conveyed that you are not so much tying two strands of floss together and are in reality tying knots onto the second strand my first bracelet would have come out better. I found holding the string straight down with one hand while wrapping the string being brought across(the one you are making the knots with) in the other hand made for much more even and neat knots.

3. Tie the knots in two passes rather than trying to do it all at once. I found that by tying what amounted to two knots on each string rather than one big one made everything more even and flat.

4. Tie the knots on the edges extra tight or you might get an uneven edge or have a friendship bracelet that angles off in several directions at once.

5. ALWAYS rip out a bad knot. It will be noticeable once the piece is done.

6. The instructions I used contained no suggestions on keeping the separate strands from tangling. I found using large paper clips, tying each strand to the clip and then wrapping the excess thread on the clip worked quite well. The clip also provided a way to hold onto the thread I was knotting with and make the knots more quickly. If you plan on making a large number of friendship bracelets, it might pay to purchase some tatting shuttles to maintain order among your strings.

7. Wider patterns using more strands and thicker threads require longer threads. The 72 inch-long threads I was using were way too short when I made a bracelet that is about an inch wide but was way too long for one about 1/2 an inch wide. I suppose this is something you will get better at estimating as you make more friendship bracelets.

8. You can use something other than DMC-type embroidery floss. You can even use threads of different weights. I found if one thread was a bit bigger it was best to tie those knots a little bit tighter.

9. I’ve used some embroidery floss in the past that was not colorfast. Test your yarn or embroidery floss before your favorite someone wears your gift into the shower and your friendship bracelet becomes pink or the color of mud.

10. My third bracelet was the first one that seemed worthy of keeping and sharing with someone. Your learning curve may be different but don’t get frustrated. Making friendship bracelets involves a bit of technique to have your knots even and flat. It’s not a hard technique to learn just one that takes a bit of repetition to master.

11. I still haven’t figured out a pretty way to end them off or make my friendship bracelets have some sort of clasp but hopefully as people find this new category and submit their friendship bracelet pattern and selling sites, I will spot a way to finish mine.

For now, I still have only that first, picture-less site listed. But, I have a list of other great friendship bracelet pattern sites that I plan on adding in the coming weeks. Hopefully, the owners of those sites will allow me to showcase their craftiness with a picture.

Open the conversation by being the first to comment on Friendship Bracelets Are Hot!.