The arrogant artiste. We’ve all met them, those creative types who think anyone who doesn’t “get” their art must be stupid. Our little town has one artiste who has created a whole new art form – how to destroy your marketability in a single stroke.

How excited would you be to if your local hometown paper asked to interview you for an article? How exciting would it be if that article, along with a large picture of you and your art appeared on the front page of a section of the Sunday paper? Above and below the fold?

Would you not work extremely hard to parlay that free publicity into increased awareness of your artwork and to increase sales? I think most of us would at least try to.

One artist in my local area took quite a unique approach to this golden opportunity – he told the entire community “to get off their high temple in the sky and stop buying pretty pictures of trees and birds and think about their inner lives and have some substance.”

Guess I am just a shallow temple dweller.

In case you didn’t pick it up from his answer, this artiste is an abstract expressionist painter. Which he describes as “Painting in the grand style of painting. A romantic homage to past and present artists carrying the history of tradition to preserve the romantic cult.”

When he was asked, “What challenges are there as an artist in WNC (Western North Carolina)?” he further dug the hole with his reply. “Educating the public to be aware of paintings that deal with deeper issues than horses running around a mountain field. And that artists of talent produce work that inspires thought and challenges the spirit and captures thought.” 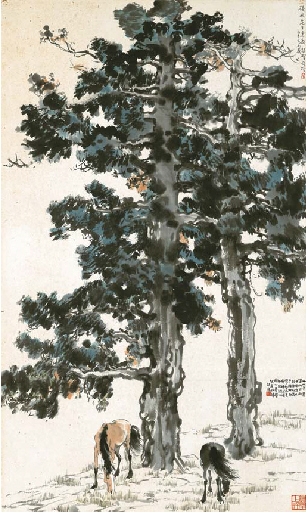 How silly our local artiste must think the person who paid over $1.2 million for this painting by XU BEIHONG (1895-1953) at a Christie’s auction in Hong Kong in 2005. After all, the painting is just a pair of horses and trees. There couldn’t possibly be any deeper issues at work here.

True artists only paint swirls and lines of color that do not look like anything us mere temple dwellers would recognize?

I guess that makes Leonardo Da Vinci and any other artist who paints in the style of Realism not talented? Does anyone think that 500 years from now anyone will have ever heard of this expressionist and his “romantic homages”? Think anyone will ever pay over a million dollars for one of his paintings?

Da Vinci died hundreds of years ago, yet, most of us could name at least one of his works.

Da Vinci was fascinated with the concept of flight. He extensively studied birds and designed several flying machines, including a helicopter and a light hang glider. Hmm, I guess Da Vinci didn’t challenge the spirit or capture thought as he simply created pretty pictures of birds.

And as if all of that wasn’t quite enough, when he was asked, “How did you get into the Western North Carolina art scene?” His uninspired answer was, “Not by choice. More of an accident.”

Western North Carolina is one of the prettiest places I’ve ever had the pleasure to live. People move to this area to be near the beautiful Blue Ridge Mountains and many are living out their life-long dream of owning horses. What could be deeper than the sheer beauty of the soaring majesty of a mountain? And one of the most breathtaking creatures to live on this great planet – a horse?

Gotta give it to this guy, he admits that he didn’t choose to be here, thinks we are all terribly stupid and shallow, and still thinks people here are going to buy his “art”.

Granted, he has gotten people talking about him. Of the comments on our paper’s local message board, 100% expressed their displeasure with the artiste, his work and his attitude. I can only imagine the many talented artists in this area who would have given almost anything to get the exposure this idiot received. It’s too bad that the damage to the marketability of other expressionist painters in this area couldn’t be measured and charged back to this arrogant New Yorker.

A quick Google search turned up his not-so-impressive website and his ties to the Big Apple.

Perhaps this fellow should have taken a bigger bite of that apple and kept his fool mouth shut.

Vincent van Gogh is quoted as having said, “I cannot help it that my pictures do not sell.” Insulting your customer pool certainly isn’t going to fix that.

Too bad our intrepid expressionist didn’t take the advice of someone much wiser, Henri Matisse. Matisse once said of artists, “Whoever wishes to devote himself to painting should begin by cutting out his own tongue.”

Craft Shows in Windy Conditions, Advice for Vendors
Selling Too Cheap
Are you competing with yourself?
Hot Glue Failures and Other Turkeys

Open the conversation by being the first to comment on How Dumb Can He Be?.