In case you missed it, yesterday was the day that we get only once every four years. As far as my to do list goes, it was pretty much a day like any other. As for personal growth, it was a day of discovery.

A chance online meeting with a Texas artist somehow began to free my creative soul. My nasty little self-critic had gotten too powerful and she helped me see the merits of simply telling it to SHUT UP!

This drawing-phobic crafter ignored her critic and created several Zendoodles and posted them on The Crafty Tipster (see Zendoodling) that were surprisingly art-like. 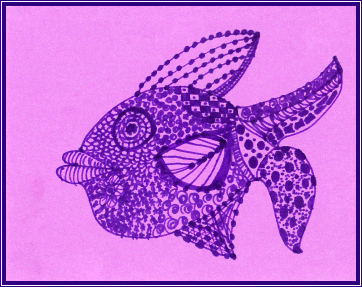 In fact, one of my doodles (a Zen fish named Charlie) has been liked and repinned a number of times. He now appears on several people’s pin boards, including one entitled “I Love”. Such a wonderful compliment to the first time that I’ve given myself permission to simply create without self-censoring.

Do visit my Crafty Tipster post and check out the fun and quirky video from the artist who led me to the freedom to create without fear of making mistakes.

Last night while watching Survivor or maybe it was Revenge (no new shows until April, are you people kidding me?), we saw a commercial for the new Eddie Murphy movie. It’s called 1,000 Words. While I have no idea if the movie is any good or not (the trailer looks good), it does pose an interesting question…What would you say if you could only speak 1,000 words and when you ran out of words, you died?

When every word counts, how would you use them?

Such an interesting proposition.

What you do today is important because you are exchanging a day of your life for it.

Open the conversation by being the first to comment on Leap Week Wisdom.