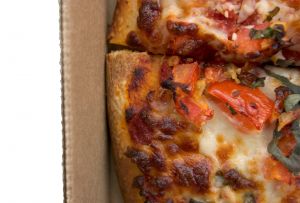 I’m in my mid-forties. I remember when pizza was this yummy extravaganza of gooey cheese that could stretch as long as your arm and rich tomato sauce on a crispy, yet soft, doughy crust. When it was hot, you folded the piece in half to keep on the toppings in place. Oh so good.

I haven’t seen it in years. Sure we’ve been to pizza places across the country but none are even close to the yummy, ummy goodness of the pizzas of yesterday. We knew New York style pizza. Today’s thin crust, with it’s scrape of sauce and often burnt-looking cheese is not New York pizza. Even calling it pizza is questionable. We had wondered for years why is there no one who knows how to make decent pizza.

We went to the local brick-oven place that people were raving about. When our pies were delivered to the table, we looked at each other and immediately said, “Where’s the sauce?” When we asked our waitress for more sauce, she said she would have to talk to the owner. Huh? He came scurrying over and said that they didn’t have sauce on their pizzas; they were California style. We learned that day that folks in California apparently let their local restaurants get away with simply putting chopped tomatoes on their pies and not have to bother making a true sauce. Chopped tomatoes on top we had heard of. Chopped tomatoes in lieu of sauce – sacrilege that should not ever be called a pizza.

Using “real mozzarella” produces blobs of mushy white stuff that looks like blobs of pudding on the pizza. Where the heck is the good stuff? Most restaurants are using flatbread. Flatbread? Yeah, cause it cooks way faster and is no doubt cheaper.

We’ve lost count of the “authentic New York style” offerings we’ve tried…that were big time stinko and held no resemblance to the crust, sauce or cheese we keep hoping to find.

Several months ago, we were watching one of those reality TV shows where a famous chef visits a failing restaurant and helps them turn things around. It was an Italian place in, I think, Colorado. When the pizza hit the table, Mom and I went, “Oh, my God. Look at that!” There, finally was the wonderful pizza we have been searching for. The response of the chef? “Ew, gross. This is a soggy crust and greasy mess. So, old school.” It looked like the wonderful pizzas I had grown up with. He made them change it to the more modern, fresh and blah stuff everyone else has. We read the before and after reviews and quite a few people wanted the old, yummy pizza back. Hopefully, the owners now offer both versions.

What launched me today? Oh, one of those emails from Pinterest with a collection of boards they thought I might find interesting. The topic today was pizza. I looked at one board that had over 400 different Pins and maybe one of the pizzas looked worthwhile. The rest had burnt cheese, little to no sauce and/or tasteless flatbread crusts. sigh.

So, now we know where really good pizza went. It was deemed old-fashioned and systematically removed from restaurant menus. It is now replaced with cheaper, easier and quicker to make copies that the un-initiated don’t seem to know are far from what a real pizza was meant to be. How sad that the public accepts these pathetic copies of a once yummy and decadent delight.

We live in hope that we’ll find a holdout who understands that while just about any pizza will sell, truly decadent pizza is amazing and worth almost any price.

Another Fun Day in Paradise
Whatever, I Quit
Spring 2014
Cat Litter Box Joke

Open the conversation by being the first to comment on Ode to the Pizza That Was.