Can it really only be 32 days until Christmas? And 38 days until the year is over? How is that possible? What happened to all of the wonderful things I was going to make? It seems like eons ago and only yesterday that I resolved that this year I would do less writing about arts and crafts and more making of arts and crafts. Sigh. Does it count if most of the year is spent in the thinking phase?

I had good intentions. Back in the early spring I purchased what I thought would be the coolest socks ever to make a sock monkey with. Way back in August of 2006, when the first sock monkey site was added to Crafty Tips, I knew I had wanted to make one of these charming fellows. As the years slid by, I kept promising myself, I WILL DO THIS. Anyway, back in the spring, I found the perfect socks. Black stripes mixed with bold and bright colored stripes. I paid a bit more than I had hoped to but hey this was going to be the culmination of 6 years of procrastination. The store is one of those fun places that has a bit of this and that gathered from all over the place. It is the kind of place that just about any crafter could get lost in for several hours. 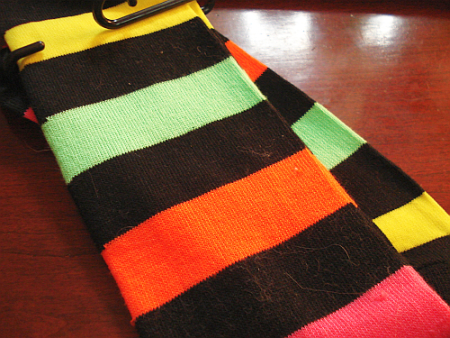 I took out my perfect socks and began gathering my supplies (yikes the colors in the photo are off – think bright fluorescent colors, not what you see here, only the yellow is the right color).

The socks had been on a display rack with one of those little sock hangers and the socks were wrapped with a label. I took the label off and quickly realized my prefect socks had an insurmountable problem…My Left Foot. or to be more precise one LEFT FOOT and one RIGHT FOOT.

Are you kidding me?

$5 for a pair of socks I could never hope to stretch over my big feet and even bigger calves and some turkey covered up the writing on them with a label???? Yes, indeed, if I’m fussing over a $5 pair of socks, you know my secret – I’m cheap. 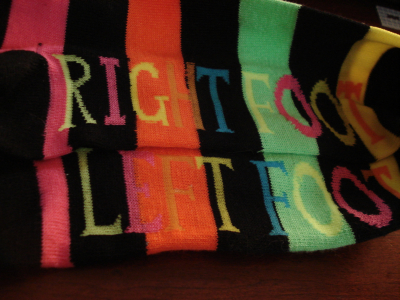 Sigh. So, the socks have sat mockingly on the edge of my desk since then. Daring me to use them anyway. No matter how I position them, the writing just makes it impossible to use them. It could be cute to have LEFT FOOT running down the left leg. But, it’s not as cute to have LEFT FOOT on both sides of the monkey’s body or down his arms. Note to self, never buy socks without double checking what the stupid label might be hiding, particularly if you want to make a sock animal from them.

Since then, I’ve been looking for a pair of cool socks in a sort of desultory way. If I found them cool. If I didn’t find any, no great loss. Of course, those ‘perfect’ socks continued to mock me as each month went past. Sure, I could have thrown them out, given them away or put them in with my fabric stash but gee, that would deny them the fun of tormenting me.

A few weeks ago, we were in Roses Department Store. Love that place! This year seems to be the year of the big, bold, flashy booty sock. You’ve seen them, those short little tennis socks that have no cuffs. In between the booties were, gasp, big, bold and flashy knee socks. Woo hoo. Oh wait. $5 for 3 pairs and only 2 pairs had patterns on them. Well, that’s a bit nasty sneaky. Not as sneaky as the folks behind LEFT FOOT/RIGHT FOOT but certainly not very nice.

Wandering over to the sock section, buried amongst the 3 packs of socks and 8 packs of booties were a few, lone pairs of knee socks for $1 a pair. Jackpot! Stuff that Left Foot!

I suspect I wasn’t the only one who could do the math here. The same socks that were $5 for 3 were available for $1. I could pick the exact ones I wanted and I didn’t have to get stuck with a blank sock. Sadly, I got to the party a little late, but I did score two cool pairs.

Now, I would finally make my sock monkey!!!

I didn’t want to drag out my sewing machine, so over the course of several nights I stitched up the legs. Black thread, black socks…eeek. I couldn’t see a darn thing I was doing. I had my legs and tail sewn and began stuffing. Yuck, yuck and double yuck. No matter how little stuffing I used at one time or how carefully I stuffed, I had a lumpy, bumpy mess. It looked like my poor tail had been danced upon by a dozen left feet and a few right ones too. As an added bonus, the stripes on the sock pattern were obviously stretched out of shape and each stripe was a different size. 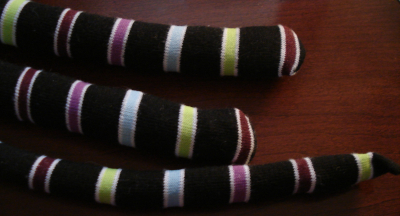 OK, that made sense to me actually. The original socks used for sock monkeys are thickly woven boot socks. I was using thinly woven cheapo’s.

It took a bit of thinking but I figured it out and got my limbs looking more smooth and as an added bonus they also turned out more supple. Hmm, don’t imagine I ever thought I would talk about smooth and supple legs in a blog post before. Oh, it it looks like my tail might need a bit more adjusting. But, overall, I’m happy with what I had done.

On to the face. Nose went on without much fuss. I hemmed it first and then attached it. It went on so easy, I didn’t even need to pin it. Ears were a little tricky but they were done fairly easily too. Striped socks were fussy for the limbs but they certainly make it easier to attach the nose and ears. Next the eyes. Oh my goodness, the eyes. Where do I begin with the eyes and the battle of the buttons?…I’ll tell you about that tomorrow and share with you the tutorial that came out of three days of trial, error, and frustration.

Open the conversation by being the first to comment on Tails, Fails & Resolutions.