Back on January 4th, I wrote that I was determined to actually follow through on a New Year’s Crafting Resolution to craft more rather than daydream about crafting and not actually doing much.

This year appears to be turning into the year of embroidery, particularly cross stitch.

Thus far, I’ve finished and posted several Cross Stitch Patterns on The Crafty Tipster and am working on a few more.

Along with that crafting project, I’ve got another all-over cross stitch background pattern I’m working on. 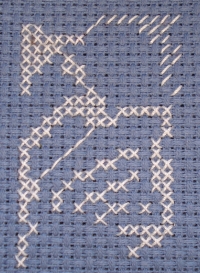 It’s only about 1/8th done so unless someone can guess what it is, I’ll leave it for another post to reveal the completed form. It’s turning out to be more challenging and time consuming than the other ones, so I hope once the pattern’s posted there will be at least one person who finds it useful.

The final crafting project that I am actively working on stemmed from a recent thrift store find.

Living in North Carolina and just over the state line from South Carolina can often lead to truly awesome thrift store finds. So very many of the knitting mills have moved to other countries yet, there are still remnants from their endeavors and companies who are remaining steadfastly American. It provides crafters with access to supplies that most of us could never hope to afford. If anything, it often becomes a question of storage space rather than price. Thread that can sell for $5-10 for a small spool can be purchased on a full commercial spool for $5 or less. Only problem is that the spool is 10-12 inches tall and wound with so much thread that it’s 7-8 inches wide. I have enough gold and silver filament thread that a dozen embroiders couldn’t possibly use in their lifetimes.

One store, which we hardly ever manage to be near on a day they are actually open, had three plain, army green boxes on a shelf. I knew what they were, just not what treasures they might hold. Many of the commercial sewing supplies come in those green boxes. If they still have the original contents they often hold thread, needles, buttons, roses, ribbons and all other sorts of crafty goodness.

Two were boxes of bobbins with thread. Even though only $1, I had no idea what I could possibly do with 40 or 50 sewing machine bobbins of brown and black thread. Those, I put back on the shelf. The third box was the score – hundreds, perhaps even a thousand little red buttons. 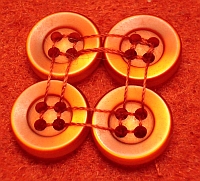 So, yesterday I started on a project to make something with my buttons. For now, I’ll just give you a teaser of what I’m making, particularly since I’m still not entirely sure how it’s going to turn out.

And the best part is that I’m having a blast keeping my crafting resolution.

So, how’s everyone else doing on their resolutions? Anyone think they know what the unfinished cross stitch pattern or filet crochet will be? Anyone wanna trade for some gold and silver thread?

Open the conversation by being the first to comment on WIP Crafting Report January 2012.