Why is it so many artists and other creative types feel the need to insult the work of others to somehow promote themselves? Some years ago I wrote about a local artist who seemed to think the best way to get people to buy his work was to call them shallow and generally attack anyone who liked realistic paintings of horses and trees…How Dumb Can He Be?.

While one German artist is making headlines for his comments about female painters not being able to paint very well and basing his opinion on historical auction prices, one of the world’s most beloved female Impressionist painters was making headlines of her own.

I’m not going to talk further about the German fellow or discuss his art other than to mention that one of his most famous works is a scary looking painting of little boy fondling himself. (I’ve seen it and it’s not anything I would ever display on one of my sites or even wish to view a second time.) Sorry, sir, but that is not my idea of art and perhaps provides a hint as to why you have such a low opinion of female artists and perhaps women in general.

Women can too paint! 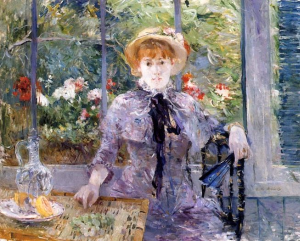 Berthe Morisot is one of the artists that I have profiled on my other site The Famous Artists. Along with a biography of Morisot, I share a number of her works that I felt showed her range of subjects. Whether it’s because I have a good eye or just like pretty things, Après le déjeuner or After the Luncheon was one of the works I had chosen. (You can follow the links to see a larger version of the painting and learn a bit more about it and Morisot. Did you know that she was the sister-in-law of Edouard Manet?)

The Role of Women in Art History

If you think about world history and the roles women have held, it wasn’t really until Morisot’s time, the mid-to-late 1800s that it was acceptable for women to paint as a profession. While many women did paint wonderful works of art prior to the 1800s, their work was considered little more than a way for them to pass the time.

Generally speaking, there’s far fewer surviving works of woman artists than male artists simply because it was socially unacceptable for women to engage in trade. Additionally, woman artists were often restricted to painting children and flowers to preserve their femininity. Of course, that restriction has always made me question if the male artists of the day were indeed worried about their kingdom being taken over by equally talented female painters.

Even modern-day art scholars try to limit the impact of female artists.

When I was researching Berthe Morisot for The Famous Artists, I found that many portrayed Morisot as something of a hanger-on within the circle of Impressionists of Paris. They seemed unwilling to acknowledge her success was attributable to her skill rather than her familial ties to Manet.

More open-minded scholars and the writings of Manet and other male artists of the time tell a far different tale. Morisot was instrumental in the Impressionist movement. Her work inspired Manet and is thought to have led him to adopting the Impressionist style. Bet you didn’t know that. Is it any wonder that the work of female artists garners lower auction prices when scholars in the field refuse to recognize the role women have held in the art world?

My formal education, from which the visual arts were basically absent, introduced me to a number of historically important artists but they were primarily related to my own field of study – science and math.

Ask most folks about famous artists and they are going to name the big ones – DaVinci, Van Gogh, Picasso, etc. Sadly the list is often quite short. Sometimes you might get a mention of Morisot or Georgia O’Keeffe (particularly if you’ve ever lived in her home state of Texas, like I did for several years) but for the most part Americans are not taught about the contributions of female artists.

Before I began a site about the lives and works of famous artists, I’d never heard of Morisot. Heck, I’d barely heard of Manet, Cezanne and Pissarro for that matter. Even though I earned a liberal arts degree, my education did not include coverage of the visual arts. Though based on my research of Morisot, I’m not sure I missed all that much if many art scholars believe Morisot had no historical importance beyond who she married.

I’ll never agree with the German painter who has proclaimed that female painters are simply less-skilled. I suspect it’s more an issue of traditional gender roles. Just like we often assume a nurse is female, we’ve somehow been conditioned to think of top-echelon painters as being male. Both stereotypes are stupid. Sadly, both stereotypes are continually embraced.

According to Wikipedia even the 48th most expensive painting sold in history garnered over $50 million more than Morisot’s record-setting Après le déjeuner. (The list only goes to 48.)

I’m excited to see that the prices are rising for paintings by women. But, I think we have a long way to go before the established art world gives them the credit they are truly due.

One Response to Women Painters Are Less Talented?